The Major League Baseball playoffs are underway. Fans across the country are cheering for their team’s success with the hope of making the World Series and becoming world champions. Baseball is an amazing sport with a long and storied history. The game is filled with amazing athletes, managers, and owners who have given the world great entertainment for so many years.

One of those legendary athletes was Harold Henry Reese. He demonstrated his competitive talents early in life when he became a marbles champion of Louisville, Kentucky. It was because of his great skills with marbles that that he earned his nickname that would stay with him for the rest of his life, “Pee Wee.”

Pee Wee Reese would go on to become one of the most famous and successful baseball players of the 20thcentury.  He played in the major leagues for 16 years. Pee Wee was a 10 time All-Star, World Series Champion, and captain of the Brooklyn Dodgers.  His accomplishments on the baseball field were so substantial that in 1984, Pee Wee Reese was inducted into the Hall of Fame.

Pee Wee Reese’s contributions to baseball were significant. He was a tremendous competitor. However, his most important action, one that truly helped change the game, is his acceptance and support of Jackie Robinson. Jackie Robinson was the first African American to play Major League Baseball. He joined Pee Wee Reese and the Brooklyn Dodgers in 1947.

That year, the Brooklyn Dodgers traveled to Cincinnati to play the Reds. The Cincinnati crowd was extremely vocal in their protest of Jackie Robinson. Before the first pitch was thrown, Pee Wee left his position at shortstop and made his way to first base where he put his arm around Jackie Robinson. This now famous gesture was a significant moment to that crowd, to all of baseball, and to America. Pee Wee Reese helped to show the world how to truly love your neighbor.

Sports are such an important part of our culture. The friendship of Pee Wee Reese and Jackie Robinson goes beyond their success on the baseball field. This friendship, and this amazing gesture of acceptance, helped to change the game of baseball. Today this action remains a symbol that encourages positive race relations for an entire nation.  When we offer a kind word, a handshake, or even an embrace to those who are different from ourselves, we too can help the world see that it is possible to love our neighbor, no exceptions. 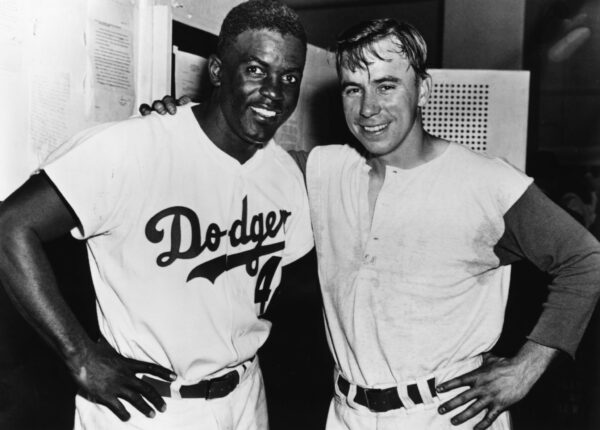