A little bit of kindness can go a long way, especially when it helps to recover a small wallet lost in a foreign country. Laurie Fenby was enjoying a relaxing Saturday in her hometown of Rochester, New York. She was spending the morning looking for treasures at garage sales. Laurie had made a small purchase and was walking down the driveway when she spotted a small wallet on the ground. She picked the wallet up, looked inside, and realized that it belonged to a young man named George.

This small act of kindness does not stop there. It turns out that George was part of a group of migrant workers from Jamaica. They were in New York to pick apples. After getting to know each other, Laurie asked George if he and the group needed anything. George hesitated and then said, “Yes. We need warmer clothes.” Laurie returned to the social media that helped her connect to George. She let the community know about this group’s needs and before long, she had collected warm clothes for all the workers.

Laurie Fenby’s small act of kindness grew into so much more. George recovered his wallet and all the contents. The workers were better dressed for the cold of New York, and a new friendship has been started… all because of an intentional act of kindness.  Kindness is essential to being a good neighbor. I hope that today you will be on the lookout for small moments to express kindness. You never know how big of a difference you will make. 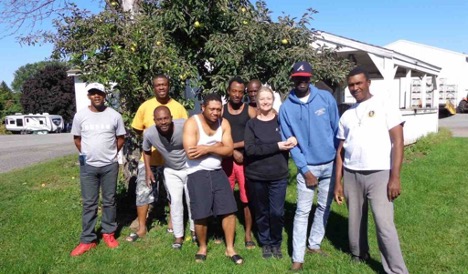