You do well if you really fulfill the royal law according to the scripture, “You shall love your neighbor as yourself.” – James 2:8

Flash floods are dangerous. When significant amounts of rain come quickly to an area that does not drain water well, a flood can happen, catching unsuspecting people in hazardous situations. Just a few weeks ago, on September 16, a flash flood caught many people in Washington, D.C. off guard.

Virginia Waller-Torres was driving her car near Arlington National cemetery. Out of nowhere, the water fell and began to fill the streets. Virginia’s small car was quickly stopped by the rushing water. She had nowhere to go. Virginia was stalled in the middle of a dangerous road, worried what would happen next, as the rains continued to pour down.

As Virginia’s anxiety began to grow, something amazing happened.  A large bus pulled over just in front of her car. The door of the bus opened and out stepped the United States Marines. The greatest amphibious force in the world just happened to be driving by and decided they could help. To be specific, it was four Marines, in dress uniforms, who are part of a special unit who serve at the funerals of fallen Marines and dignitaries. Their normal duty is to help carry people to their final resting place, but on this day, they would push a small car and its occupant to safety.

Virginia recorded the special moment on her phone. She later posted it to social media and the video now has been seen by millions of people. It was a beautiful moment that brought Virginia to safety and tremendous joy to everyone who saw the video. We take great pride in the men and women who serve in our armed forces. They do so much in service to our country. But on that day in Washington D.C., there was more than patriotism at work. The real joy came as four young men walked through a flash flood to help. They saw a person stranded and in trouble and they acted. This is what neighbors do.

We are called to love our neighbor, no exceptions. One of the great expressions of love is to help those in need. Each of us has the ability to meet the needs of our neighbors. When a moment of trial happens, we should respond. The love of God can be shared in the simplest of moments and the smallest of acts. Like these young Marines, let us be reminded today to not hesitate. When we see a neighbor in need, let us respond in love. 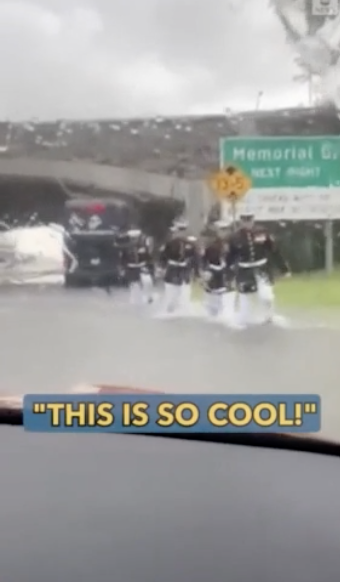