It was on February 2, 2014 that Dr. Long shared the news of the expansion of St. Luke’s to a new satellite campus.  The new satellite campus would open on March 30, 2014 with the first worship service taking place in a temporary location at Sequoyah Middle School, utilizing the school’s cafeteria and gymnasium.  Dr. Long shared that the mission of “Sharing God’s Love and Bringing Hope to the World” rang more true than ever before and that the days ahead would be pivotal in the sharing of Christ through our family of faith.

Another page in St. Luke’s history was written on Sunday, March 30, 2014 as St. Luke’s Edmond held its first worship service at Sequoyah Middle School in Edmond.  Campus Pastor Josh Attaway and 83 volunteers and staff were on hand to welcome 453 in attendance. There were 43 children who attended and the day concluded with a lunch for the Edmond Campus Youth with 15 teens and leaders who visited about the future plans and dreams for the new group.  It was an exciting time to be a part of the St. Luke’s family of faith.

In less than one year, St. Luke’s Edmond Campus had been sharing Christ in incredible ways. There were 103 people who joined the church and the attendance had been averaging 240 people in worship! We celebrated baptisms, births of new babies, and weddings. Growing in faith was important with over 160 people participating in Wednesday Night Alive and 10 new community groups meeting on a regular basis. The tradition of community service began with school supply drives, Christmas and Easter Offerings, Mission Trees, and a new mentoring program in partnership with Sequoyah Middle School.

In 2015, the “Next Chapter” campaign began, it was time to move the temporary satellite campus to a new and bigger home!  The new home of St. Luke’s Edmond would be an amazing 41,000 square foot campus. It would have a beautiful worship center similar to the Christian Life Center at the Downtown Campus. The Campus would include a full-time childcare center, Threefold Bookstore, and classrooms for children and adults. There would an amazing indoor playground, beautiful landscaping and walking trails around the property. This would be a place for people to call home for many generations to come.

It was on October 16, 2016 that another page was added to St. Luke’s Edmond’s Campus history; approximately 1,355 people walked through the doors of the new 41,000 sq. ft. building on that Sunday. In just a little over 2 ½ years, St. Luke’s Edmond became one of Oklahoma’s largest Methodist Churches – in just one day!

It was an exciting time for the Edmond Family of Faith.  Rev. Josh Attaway said this about Opening Day, “I can’t say enough about how grateful I am today, and how my soul is just filled from all the excitement of today. To see so many new people coming to hear the Good News of God’s grace was a special thing.  As a family of faith, we’re reaching out in new ways to accomplish our mission.”

St. Luke’s Edmond Campus continued to grow and share its excitement!  As part of an anniversary celebration in 2018 – the following statistics were shared about the two years that St. Luke’s Edmond had been in their permanent home: 1,271 1st time guests; 369 new members. 67 Baptisms; 530 songs sung in Worship Services; 400+ WNA participants; 25,000+ Donuts Served!

St. Luke’s Edmond was started with the intention of sharing Christ. The family of faith felt that it needed to step out in a way that no other United Methodist Church in Oklahoma had done before. From a temporary home in a school cafeteria and gymnasium to a beautiful church home, St. Luke’s Edmond is building a family of faith that will last for generations to come.  In 2019, St. Luke’s Edmond continues to grow and expand. Plans are underway for a new building for the Youth and Music Ministries.

On Sunday, March 31, St. Luke’s Edmond will celebrate their 5th Anniversary with special Worship Services at 9:15 and 11 a.m.  The newly installed Edmond Bell will be unveiled with a special dedication service that day. 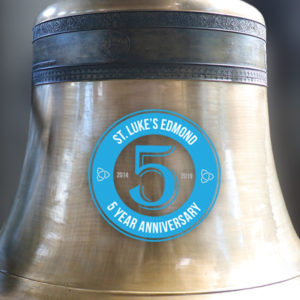