“I want you to know, beloved, that what has happened to me has actually helped to spread the gospel, so that it has become known throughout the whole imperial guard and to everyone else that my imprisonment is for Christ;” – Philippians 1:12-13

We were on our way to Branson, Missouri for a family vacation. I took the wrong exit and, the next thing you know, we were almost to Arkansas. We had no intention of visiting the Natural State before we arrived in Missouri, but a wrong turn, great family conversation, and a little bit of inattentiveness led us off our predetermined path.

This trip was before GPS and iPhone that could tell us where to go. Now we were off schedule and off our printed map. It was not a great way to start our vacation. It was a setback to our schedule.

Life is full of setbacks. Some are small, like a wrong turn in Tulsa, and some are big. So often we have plans and dreams that get interrupted. The Apostle Paul knew about setbacks all too well. His goal was to spread the good news of Jesus Christ and start churches around the Mediterranean world. On many occasions, he ran into many setbacks.  On several occasions, he had rocks thrown at him for preaching and often he was run out of town for disturbing the peace.

In the book of Philippians, we find Paul under arrest, locked in chains. How could he realize his goal now? Paul did not let his arrest stop him. Even though he was cast into a Roman prison, his joyful spirit and determination to share the good news of God allowed his dream to be realized still. He simply saw his setback as a new opportunity. Now in prison, Paul had a new audience. His new audience became prison guards, fellow prisoners, and those who would receive his letters. Paul stayed focused on his goal, and no matter the difficulties, he was able to find a way to bring his goals to life. Because he did not allow setbacks to stop him, the church has been blessed for many years. The passionate and honest outpouring of his thoughts in the book of Philippians has been encouraging people of faith for almost two thousand years.

If the last 19 months (yes, it has been that long since we first shut down for COVID-19) have taught us anything, it is that setbacks will happen. Our plans will get interrupted. But that does not stop us from doing the work that God has called us to do. Setbacks are simply opportunities to do something that we were unable to foresee.

When we arrived in Arkansas, we made the best of our time there. We stopped and took pictures at the Arkansas border and that picture is one of my favorites still. We even bought Arkansas t-shirts to wear during our vacation.

When we experience a setback, we need to look around for the new opportunities that present themselves in the moment.  Like Paul in prison, if we remember who we are called to be… a people who are called to love our neighbors… we will find a way to share God’s love, even when life takes us off course. 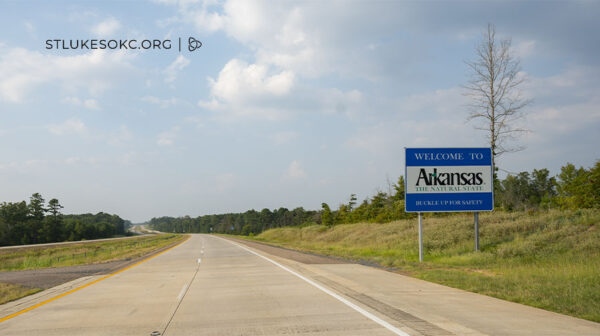