“For we are God’s handiwork, created in Christ Jesus to do good works, which God prepared in advance for us to do.” – Ephesians 2:10

There are two wonderful things I enjoy. One is missions and the other is pizza. The only way for these two things to be better would be to combine them. Now, that would be great! In March of 2019, when the nationwide lockdown began, Ben Berman found a way to do just that.

When Ben was in high school, he began cooking. He loved to cook and loved to learn how to make new things. His grandmother was his first teacher, but soon he was working in local restaurants. By the time he was in college, he was running his own food truck. After graduation from college, he went to work for a medical consulting firm. In 2020, Ben began work on an MBA and had great plans for his education and career. By March, his plans had changed.

The biggest change that happened to Ben in 2020 is when the lockdown began. He wanted to cook a meal for his friends, but he knew they would not be able to get together. He decided to cook pizza in his own kitchen and come up with a creative way to distribute to his friends, all while social distancing. Ben ordered some rope and pizza boxes online. He invited his friends to his apartment and when they arrived Ben lowered the pizza to them from the second floor.

The first time it was just for fun. However, it caught on! It became a fun thing for Ben to do with his friends and community. Somehow, lowering pizza out a window lifted other’s spirits. Eventually, Ben had the idea to ask for donations for the pizza that he would give to charity.  Good Pizza PHL was created. Ben created a social media page and began collecting funds on Venmo. He focused on helping feed those who needed food and especially those who had been affected by the trials of 2020.

In just a few months, Good Pizza PHL collected $30,000. It was a winning combination. Pizza and missions! Ben Berman took his passion for cooking and a desire to help the needy in his community and truly blessed lives.

Loving our neighbors can and truly should be fun. When we take our passion and combine it with our faith, we can share God’s love and bring hope to the world. 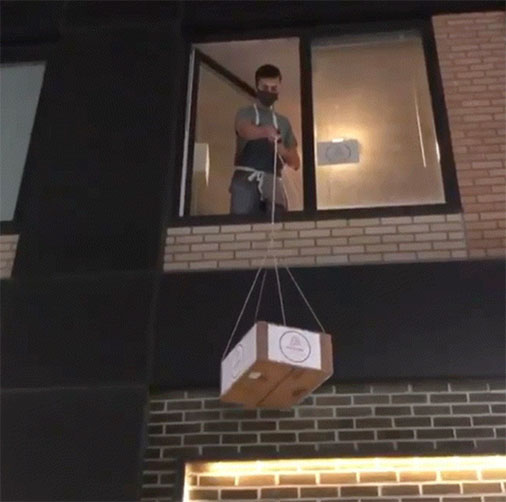