“No discipline seems pleasant at the time, but painful. Later on, however, it produces a harvest of righteousness and peace for those who have been trained by it.” –Hebrews 12:11

As a kid, Herschel Walker was overweight and had a speech impediment. Like many other children he often found himself being picked on by other kids. It was out of this painful situation that he dedicated himself to a life of fitness.

Early in his life Herschel Walker began to develop what has now become a famous workout regime. Since high school Walker daily completes over 1000 push-ups and 2000 sit-ups.  This along with a great cardio workout has helped to shape him into one of the most accomplished athletes of my lifetime.

Herschel Walker is considered one of the best running backs of all time.  He is the 1982 Heisman Trophy recipient.  He is the only player in the NFL to gain over 4,000 yards in three different ways: rushing, receiving and returning kicks.  Walker rushed for over 13,000 yards in both the USFL and NFL combined and recorded 84 touchdowns. He was also voted as part of the ESPN All Century College Football team from his time with the University of Georgia.

What amazes me about Herschel Walker is that, although he retired from the NFL in 1997, he looks like he is still capable of competing.  Perhaps that is because he has not stopped his daily discipline of working out.  In addition to football, Walker has also competed in the Winter Olympics as a member of the USA bobsledding team. He danced with the Fort Worth Ballet. He is a fifth-degree black belt in tae kwon do. And now in his 50’s, Herschel Walker is competing in Mixed Martial arts and has recorded 2 wins by knockout.

What an amazing, accomplished life for this overweight kid.

In a recent interview with the NFL, Herschel Walker was asked about his continued athletic accomplishments and his crazy workout routine. He said that when he was young he realized, “If you dedicate yourself to anything, you can do it.” Even after retirement he continues to be dedicated and disciplined.

Herschel Walker has not only made an impact on one game, but several games in several sports.  No doubt he has some natural, God-given talent, but his discipline and dedication has opened doors for this great athlete to be a game changer. If we would like to make a difference in this world it takes discipline and dedication. A daily, disciplined commitment to the passion that God has given us will help us find success in life. 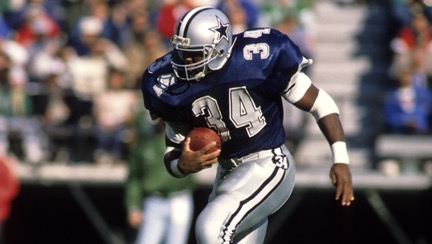