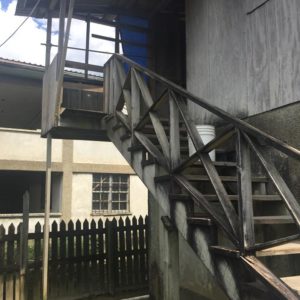 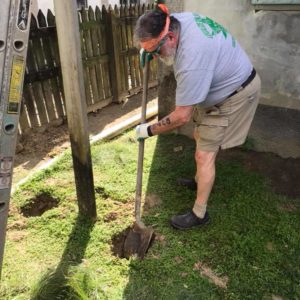 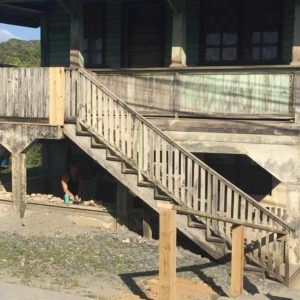 We arrived Wednesday having only a few more projects on the list and most of us thinking we’d finish up early. We began putting up the final pieces to finish the back staircase and then it was stained. Several of us where busy painting the front porch, but Mrs. Elva was really concerned about a few pieces of rotting wood siding and she did not want us to paint over it unless it was fixed. We had tried to find the siding she had at the local lumber yard, but it was no longer available, so we were kind of in a bind. After searching for a little bit, we found one piece of brand new siding that must’ve been left over from when the original siding was put up. It was tucked away behind a bunch of things on her porch. It matched perfectly but wasn’t enough to fix all the spots. We noticed shortly after that, that there were actually several pieces of the siding scatter around the yard being used to make benches for her plants to sit, fixing gaps in the fence, etc. Many of them were weathered and not usable, but we eventually found one more piece and it was enough for us to replace the three rotted sections of siding. There was a lot of painting that needed to take place that afternoon and our space was small.

Several of the neighborhood kids had heard we were there by this day so we had lots of help from them that day too. Because we weren’t all able to participate in the painting there was another moment created that I believe was completely by God’s design. Most of our guys had been head down all week working on the staircase and now the work that required their specific skills were done and the door was opened (maybe even thrust open and knocked down) for them to get some one on one time with the kids. The results were beautiful. To see some of our rough and tough men completely circled by the little children was profoundly moving and very meaningful – not only for the children but also the men.

We worked later than we had the previous days and got the job finished. Mrs. Elva was grateful and we all hugged her neck and said our goodbyes. That evening, back at the house we had another great devotional and a stunning sunset to end our night.