The Gift of Family

Tony is a young man who has had a difficult start to life. He was given up for adoption when he was born. Unfortunately, he spent many years in the foster care system before being adopted. He lived with his new family for six years, until they left him at a local hospital for medical care and never came back to take him home. They gave up their parental rights and Tony went back into the foster care system.

Peter Mutabazi received a phone call from a foster care worker who told him about Tony. Peter willingly received Tony into his home. How could he not, after hearing how Tony was abandoned? Peter immediately went to work making sure that Tony knew he was safe and welcomed.

This was not easy work, but Peter understood how important it is to have a home and a family who cares. Peter grew up in an abusive home. When he was just 10 years old, he ran away from home. He was taken in by a person who helped him grow up and finish school.  Peter has never forgotten what it was like to be homeless and then welcomed into a home that gives the opportunity to live and thrive.

Peter Mutabazi understands that he was blessed when he was taken in by a caring family. He knew what might have happened to him if he was left alone. When he heard about Tony, he knew that he had to care for him. Today, Tony Mutabazi is a young man with a home and a dad who cares for him. He has been adopted. He has been given the gift of family. Their story is an inspiration to so many.

As a people of faith, we often use the language of adoption to define our place in the family of faith.  There is no greater example of how we come together to become a family. God has adopted us, welcomed us home, and given us a place where we can grow, flourish, and know the gift of life that was intended for us from the day we were created.  When Peter took Tony home that day, a new family was formed. Today we give thanks for Peter and Tony and we are reminded that we too have been welcomed into a new family – where we are blessed and where we can become a blessing to others as we help to welcome them home, into a new family of faith. 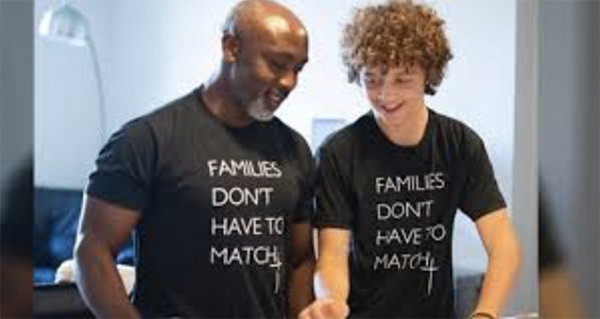