No one could have blamed Mary Ann Franco if she had thought, “Again, God?  Two terrible accidents?  Why me?”

In 1995, she was involved in a violent car wreck.  Fortunately, she lived.  Unfortunately, the collision left her blind.

“It’s not great,” she explained, “being in the black all the time.”

Fast forward 21 years; Mary suffered another life-altering accident… this time in her home.  She injured her neck in a fall.  The pain was so bad, surgery on her spine was her only hope for relief.

When she woke up the next morning, the darkness was gone.  She saw beautiful trees through the window.

She called it a ‘miracle.’  How else could anyone explain a spinal surgery restoring her eyesight?  Her neurosurgeon guessed they unknowingly reestablished blood flow to a vessel that allowed restoration of her vision.  But even he concluded it was ‘a true miracle.’

Light overcoming darkness is also the theme of “Come from Away” – one of the musicals being featured this year during the St. Luke’s on Broadway sermon series.

It tells the true story of 38 airplanes that were diverted to Newfoundland, Canada on September 11, 2001.  The terrorist attacks of 9/11 caused 7,000 travelers from all over the world to suddenly be stuck in the small town of Gander until air travel was declared safe again… nearly five days later.  They may have thought, “Why us?”

But what began as a terrifying situation for those passengers eventually changed their lives for the better… all because of the kindness of Gander.

The “come from aways” (as Newfoundlanders call anyone not from the island) were provided with food, clothing, shelter, medicine… you name it.  Gander residents opened their homes, took passengers sightseeing, moose hunting, berry picking… all for free.

“That whole community is the poster child for how hospitality and just a sheer act of humanity should be,” said one passenger from St. Louis.

The evil of 9/11 had blinded those travelers with fear.  Their forced landing began with little hope.  But the light of kindness opened their eyes to how we should all treat one another.

Having regained her sight after two decades, Mary Ann Franco sees the world differently as well.

“(The experience) has changed me to being more of myself, and peaceful, and more giving,” she said.

The “come from aways” would agree. 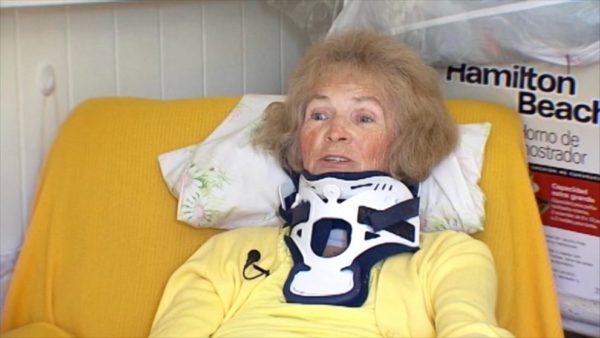