In 2015, Lin-Manuel Miranda’s Hamilton debuted on Broadway. It is a cutting-edge musical that combined hip hop and classical Broadway music and dance. From the moment it began on Broadway it has been both a critical and popular success. It won a record-setting 11 Tony Awards in 2016. It has played around the world and continues today on Broadway. It Is one of the most successful shows in Broadway history.

The original cast of Hamilton helped to bring this work to life. Telling the story of Alexander Hamilton and the powerful story of the start of our country was a challenge. Their amazing talent and Lin-Manuel Miranda’s exceptional imagination and writing skills helped to tell this story in a modern, amazing way.

Leslie Odom Jr. was part of the original cast. He played Aaron Burr, the founding father who shot Alexander Hamilton in a dual. For his work on stage bringing the character of Aaron Burr to life, Leslie Odom Jr. won the Tony for Best Actor in a Musical. Along with the rest of the original cast, Leslie Odom Jr. has gone on from Hamilton to have great success on stage and in Television and the Movies. Just recently Leslie became a published author with the release of his first book Failing Up: How to take Risks, Aim Higher, and Never Stop Learning.

Like so many, success did not come easily for Leslie Odom Jr. He had tried and tried to be an actor on stage and the screen. Just a little while before Hamilton, he filmed the pilot for a T.V. show that would never be picked up. Odom’s lack of success began to cause him to doubt his dreams and soon he found himself applying for hotel clerk jobs.

Thankfully, he had met Lin-Manuel a few years before and was invited to be part of the initial reading of Hamilton. He immediately fell in love with the character of Aaron Burr. He set his sights on playing that role. He studied and practiced to be ready to be the one who would bring Burr to life on stage. Leslie Odom Jr. said, “You have to walk towards the things that make you alive.” When Hamilton the musical arrived on Broadway, it was led, in part by Leslie Odom Jr. playing the role of Aaron Burr. 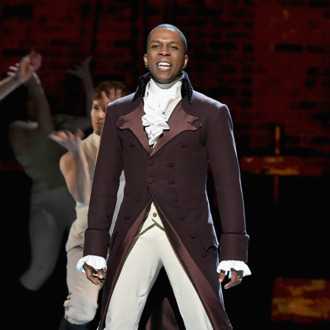