On this particular Wednesday, I am in the Holy Land. It has been a great trip with a group of wonderful people! Yesterday was a particular blessing for me. I had a chance to relive a special moment. Two years ago I was part of another trip to the Holy Land and we stopped to have lunch in Jericho, part of the Palestinian Authority. The restaurant was owned and run by a Muslim family and they were good friends of our guide who was Jewish. Not only was I moved by the hospitality that was shown to me and my family, I was moved by the friendship that existed between my guide and the family. I had a picture taken with the two men and I thought how funny for the three of us to be together – a Palestian Muslim, an Israeli Jew, and an American Christian.

Yesterday we were in Jericho and I was blessed to be included in a special reunion; not only were the two old friends reconnected, but now I was part of the group and welcomed into friendship. We recreated the photograph, this time including Rev. Keith King, who is also on the trip.

The photograph represents the reality that we don’t always see – that people who are perceived to be enemies, can actually be true friends. Unfortunately, division and chaos makes for more exciting news. But – kindness and friendship makes for better news. And that is our news to tell. We are called to share the message of God’s love and bring hope to the world! Don’t let the world tell you who your enemies are – instead, tell the world about your friends. 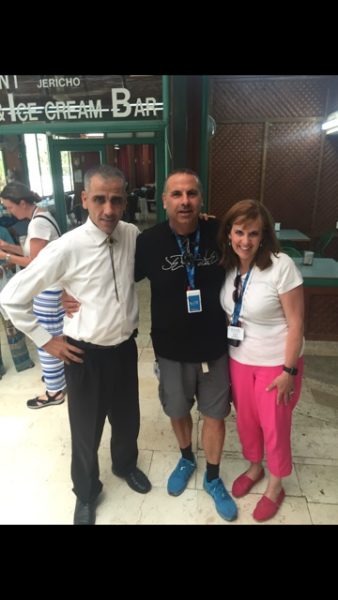