We had a wonderful time at the retirement home. One man who’s 98 shared the difficult story of his life. He has no more family living.  If you know something of the history of 20th century Russia, you can imagine what happened to him in his life from the time of birth in 1920 and through WWII and beyond. But he is so grateful to live now in a place where people are kind, he can share about his faith and talk about God and worship. He says it is like heaven on earth. Our sister Zoya was in hospital with a broken hip so we are praying for her. The group shared poems they had written, sang songs from their youth and we all sang hymns together. They wrote their names on cards along with their prayer requests so we can be praying for them even when we return home.  Pastor Dena anointed each person with oil on their hands and foreheads and we prayed for them. They were excited to receive the small lapel pin crosses that I brought. I had left the crosses with Pastor Nadya and we had not discussed how or when we would use them. I woke during the night Sunday might with the thought we should take them to the retirement home. However I did not know if they were in storage at the church or with Nadya. We were coming separately to the retirement home so I did not know how to communicate unite that idea to Nadya in time for her to bring the crosses. But when I arrived at the retirement home,  she was sitting outside waiting for me and immediately showed ne the crosses that she had brought and said we should give them to the people at the prayer group at the retirement home. I laughed and told her that the Holy Spirit had obviously placed this idea on both our hearts. 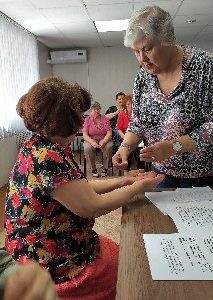 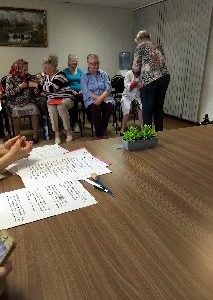 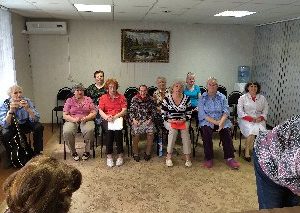 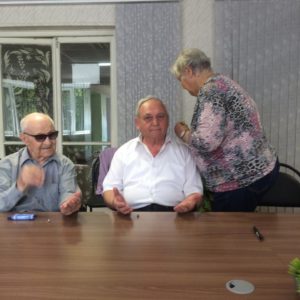 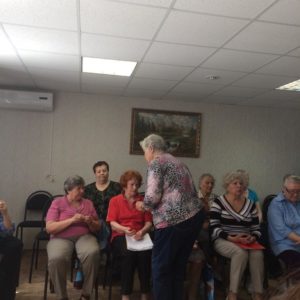 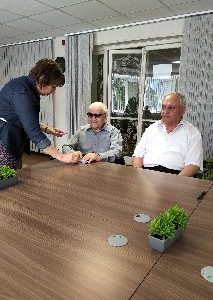 One man wanted know what Methodists believe and did we worship with icons and venerate saints. We had a great discussion. I went through the beliefs in the Apostle’s creed  one by one and all present said they agreed with those statements. I discussed the emphasis that Wesley placed on scripture and reason and experience and how we value Bible study and reading and prayer to learn how God would have us act in the world. Nadya explained the history of the protestant reformation and all the different churches that came out of that as well as differences between Protestants and Catholic and Orthodox and Baptists. Dena spoke about how we are called to love each other as Christ loved us and to show that love in very practical ways.  It was like being in class at Wednesday night Alive.