We Are The World

There are many songs that have changed the world, but there are few songs that were written with purpose of bringing relief to the world. In 1985, the country of Ethiopia was experiencing a significant famine. A severe drought had taken hold of the country and that, accompanied by oppressive governmental policies, brought a severe famine to this part of Africa. This directly caused the deaths of nearly 400,000 people.

Once the plight of the Ethiopian people became known around the world, several countries began to respond. Many nations organized airdrops to bring food to the hungry, while religious groups and charity organizations raised funds to send to the troubled nation. The sad images and stories that were coming from this country captured the hearts of the world.

In 1985, musical artists from around the United States agreed to lend their talent and fame to a project called United Support of Artists (USA) for Africa. Soon, a song was written by Lionel Richie and Michael Jackson. Quincy Jones agreed to produce the song and 45 of America’s top recording artists gathered to record the song, “We Are the World.” In just one night, artists such as Bob Dylan, Bruce Springsteen, Stevie Wonder, Tina Turner, and Kenny Rogers recorded the song that would soon occupy the number 1 spot on Billboard’s Top 100.

These amazing artists did not come together to record another hit song. They wanted to use their gifts to make a difference in the lives of the people of Ethiopia. This recording raised over $64 million dollars. The money was used to help feed and provide shelter for the people of Africa. “We Are the World” became a giant hit that helped to change the world.

In 2010, on the 25th anniversary of the original recording, artists once again gathered to record this song. This time the song was to help raise money for the people of Haiti after the devastating earthquakes that rocked the island country. These quakes resulted in thousands of deaths and the destruction of thousands of houses and buildings. Once again, “We Are the World” was recorded, this time by new artists, with the hope of changing the plight of the people of Haiti.

We’re all a part of God’s great big family
And the truth, you know, love is all we need
We are the world
We are the children
We are the ones who make a brighter day, so let’s start giving 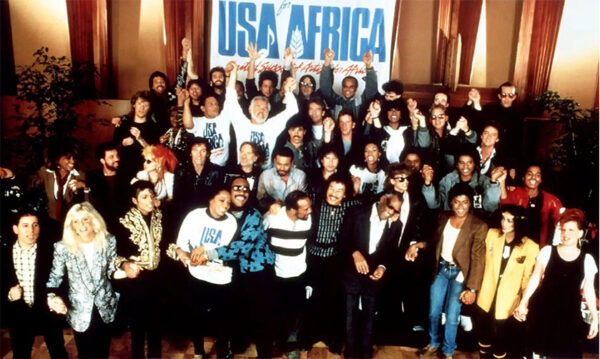