It was 1950 when Vincent Scully began his career with the Brooklyn Dodgers. In 2016, the great Vin Scully ended his 67-year career with the now Los Angeles Dodgers. Not only is Vin Scully widely considered one of, if not the best play-by-play broadcasters, he holds the record for the longest time with any one sports franchise. Scully passed away this week at the age of 94. During his career, he witnessed some of the greatest moments in baseball history and his voice is now synonymous with those moments.

It was on September 25, 2016, that Vin Scully called his last Dodgers Baseball game. At the end of that game, Scully made a brief speech. He expressed his gratitude to the Dodgers, and to the baseball fans across the world. He asked God’s blessing for everyone and then he said a profound thing; “I always felt I needed you more than you needed me.” He is a legend in baseball and a hall of fame broadcaster. Scully is known around the world. However, his fame never went to his head. His humility was evident in the gratitude he expressed.

Vin Scully’s speech reminds us of a very important part of life. We were not created to live a solitary life. We need one another.  Even when an individual achieves the highest success possible, they must realize that they did not achieve such success all on their own. Along our journey in life, we find help, encouragement, inspiration and so much more from others.

I want to encourage you to take time and give thanks for the people in your life. Consider the people who have helped you succeed. How can you express your gratitude? There were so many things that Vin Scully could have said as he signed off. He chose to express his gratitude for the people who were important to him. Let us take that example and use it to remind us of how important it is that we give thanks to the many special people in our lives. 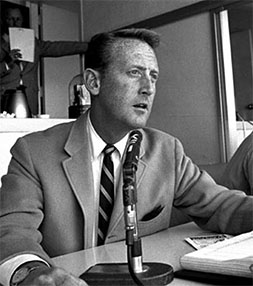