“Trust the ropes.” That is what they kept saying to us as we were preparing to rappel down a four-story tower with nothing but a rope and a harness to keep us from falling to certain doom. It was a beautiful summer day and I was enjoying a great time at camp, but on this day, we were going to learn rappelling. We had stepped into harnesses that would hold the ropes and put on a helmet. As we set at the base of this tower, I was truly petrified. Anyone who has spent much time with me knows that I am not a fan of heights, to say the least. The instructors were telling us what we needed to know to make it successfully to the bottom. We were focused on every word that came out of their mouths. No matter how much I learned while sitting on the ground, I knew that fear was going to overwhelm me when I made it to the top of the tower.

I made the long climb to the top of the rappelling tower and the instructor began to feed the ropes into my harness. There was no hiding it, I was scared, and he knew it. He reminded me of what we had learned at the bottom of the tower just moments ago and then moved me into position. He looked me in the eye and said, “You will be just fine. Just trust the ropes.” The instructor was correct. I successfully made it to the ground. I have rappelled several times since that day, and I love it.

When it comes right down to it, several others had rappelled down the tower before me. Sure, there was an element of danger, but it could be done, it had been done, and it would be fun. The problem for me was not the height or the ropes, it was trust.

Often, the same problem exists in our life of faith. God calls us to a life full of adventure, joy, and peace, but we so frequently miss out because we simply do not trust. I had seen others go before me on that rappelling tower and yet I did not trust what my eyes had seen. There have been so many times that God has called me to a new adventure and sometimes it seems too much for me. Who more can we trust than God? God’s character, God’s promises for us, and God’s love are more than enough for me to know I can trust and follow God.

But we never can prove the delights of His love
Until all on the altar we lay;
For the favor He shows, for the joy He bestows,
Are for them who will trust and obey. – Trust and Obey, by John H. Sammis 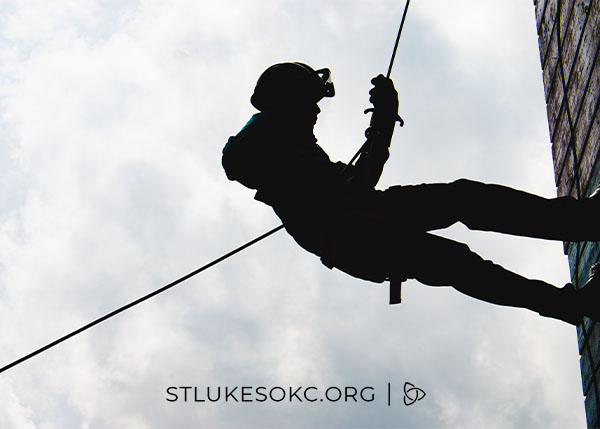