Treasure in jars of clay

“But we have this treasure in jars of clay to show that this all-surpassing power is from God and not from us.” – I Corinthians 4:7

Hanging in a small kitchen, just over a hotplate used for cooking in a small French town, was a small painting depicting the mocking of Christ before his crucifixion. It was a nice piece of art, but the owner thought it was just an old icon with little to no value. One day, a visitor to the house suggested she have the art evaluated.

She took it off the wall and delivered it to some experts for an evaluation. She was later told that the small icon was, in fact, a painting by the famous Italian painter Cenni di Pepo. It was one of only 12 pieces of his art believed to exist today. Cenni di Pepo painted in the mid 13thcentury and is widely considered one of the great painters of pre-renaissance Italy.

When asked what she wanted to do with her painting that had previously hung in her kitchen. The woman suggested she might like to sell it at auction. This past week the painting, known as “Christ Mocked” appeared at auction where it set a record by bringing in $26.8 million dollars… not too bad for an old dusty picture from a small kitchen.

I could not help but think that we often see ourselves like the lady saw her small painting in her kitchen. We see ourselves as being someone of little value. But that is not at all how God sees us. We are a great treasure, filled with the Spirit of God, created to do good things. We are a masterpiece, shaped and molded by the same God who created the oceans, mountains and the stars. Sometimes it takes an outside voice to remind us of our worth. That is why God speaks to us through the scriptures and reminds us that we are, “Treasure in jars of clay.” 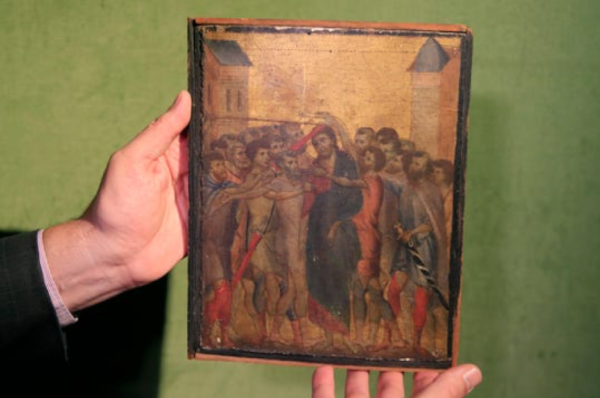