Switzer With 'Horns Up'?

Wait, what?  That last example was ridiculous.  I’d see someone with a Coke in one hand and a Pepsi in the other before I’d see the legendary Oklahoma Sooners football coach with the “horns up”… right?

Well, five days before last Christmas, there was a photo posted on Twitter of Switzer flashing that very sign.  It wasn’t altered.  It was real.  You know who posted it?  Barry did.

And he was smiling.  So was the other guy in the photo, Francisco De Soto, a University of Texas graduate who lives in Dallas.

Ohhhh, I get it.  Switzer was probably recognized by a Longhorns fan and graciously gave him a funny moment with the hook ‘em horns sign.  It was almost Christmas, after all.  What a gift, especially considering how the coach known as “The King” dominated Texas with a 9-5-2 record against them in the Cotton Bowl.  That’s a higher winning percentage than Bud Wilkinson or Bob Stoops had against UT.  Switzer wore a hat saying “BEAT TEXAS” in huge letters on the sidelines.  He still pokes friendly jabs at UT, recently posting a tweet saying, “Why I recruited Texas HS athletes?  I thought they too should have an opportunity to win championships!”

Barry won three national titles at OU.  Throw in a Super Bowl title with the Dallas Cowboys, and you have one of the greatest football coaches of all time.  Everybody knows who Barry Switzer is, right?

Well, the other guy in the photo didn’t.  That’s right, Francisco De Soto didn’t recognize Barry.  All he knew was that a man was stranded on the shoulder of I-40, dangerously close to rush hour traffic, as the setting sun was blinding drivers.  Switzer had a blown-out tire.

“Sir, do you need any help?” De Soto asked.  “Yeah, I do,” Barry responded.  As De Soto worked quickly to change the tire, Barry found out he was a 37-year-old mechanical engineer from El Paso – and he was a University of Texas alumnus.  “I thought that was funny,” Barry told me on the phone, recognizing the irony.

Since it was obvious De Soto had no clue that he had just changed the tire of Sooner royalty, Switzer spilled the beans.  “I was the head coach at OU, back when you were a little kid,” he said.  “We used to whoop up on the Longhorns.”  They shared a laugh and exchanged phone numbers – Barry insisting that he buy dinner the next time De Soto was in town.  Then they took the selfie – both flashing the “horns up” sign.  Their smiles are priceless.

The very next morning, Switzer saw a text message from De Soto, who said he received a ton of feedback from people who saw Barry’s photo of them on Twitter.  One of those people amazed by that random encounter was De Soto’s brother.  The two hadn’t talked to each other in a year.  Their relationship had soured.  “It killed me,” De Soto told Barry.  But now, because of Switzer’s post on social media, the two brothers began mending fences.  The photo broke the ice.

“Maybe that’s why you stopped,” Switzer told him.  “Maybe it was more than being a ‘good Samaritan.’  Thousands saw your depth of character, what kind of person you are.”

Crimson and Cream alongside Burnt Orange is an “odd couple” for sure.  But when we love our neighbor, with no exceptions, even those colors can paint a pretty picture. 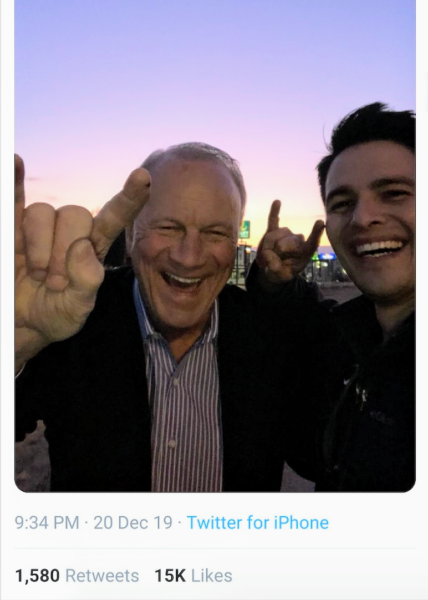