Speaking With the ISS

“Is anyone among you in trouble? Let them pray. Is anyone happy? Let them sing songs of praise. Is anyone among you sick? Let them call the elders of the church to pray over them and anoint them with oil in the name of the Lord. And the prayer offered in faith will make the sick person well; the Lord will raise them up. If they have sinned, they will be forgiven. Therefore confess your sins to each other and pray for each other so that you may be healed. The prayer of a righteous person is powerful and effective.” -James 5:13-16

On average, 7 people occupy the ISS. Just over 260 people total have lived and worked on the multi-national station. It is a small, select group of individuals that have achieved the title of astronaut and even fewer have had the privilege of working on the ISS.

On more than one occasion, I have looked to the sky to try and catch a glimpse of the International Space Station in the evening sky. You can track the orbit of the ISS from the NASA web site. It is truly a site to behold when the small dot flies overhead. It reminds me of how big creation truly is.

Recently, Isabella Payne, a young girl from England, joined her father on his ham radio. The two were so excited when they were able to establish a connection with Kjell Lindgren, an astronaut aboard the ISS. It was a brief exchange, due to the speed of the ISS. The International Space Station maintains a ham radio in case of emergency. However, the astronauts often use it to communicate with civilians. Isabella was so excited when she heard Kjell’s voice as he identified himself and his location. It was an other-worldly interaction.  Later that day, Kjell reached out on social media and told Isabella that it was one of his favorite moments on the ISS.

It is hard to imagine a young girl and her father having the ability to communicate with the technologically advanced ISS.  However, they used one of the most ordinary forms of communication in the world to reach beyond our atmosphere and speak with the ISS.

It reminds me of our ability to communicate with the living God. Prayer is one of the simplest, yet most effective tools we have that will allow us to connect with our Father in Heaven. It allows us to share our thoughts, our worries, our fears, and our deepest questions with God. And God, who listens, will speak and care for His people. 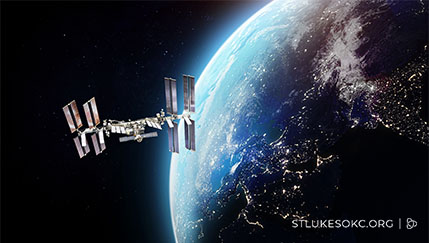