It was a cold windy November day when I received the news that my  grandfather had died in 1974.  Thanksgiving was a week away and I was finding it hard to be thankful in light of the death of Grandpa Poteet.  I loved my grandpa.  He had taught me how to gut a fish and hunt squirrels!

In addition to dealing with this loss I was pondering how I was going to be present at his funeral in Springfield, Missouri the coming Saturday and appear in a children’s play the same day.  This was my sophomore year at the University of Tulsa.  I was a theater major and had taken a part in a production at our local community theater.  The last performance was scheduled at the same time as the funeral in a town nearly 200 miles away.  I made the decision I would drive to Springfield two days before the service and pay my last respects and return to Tulsa in time to perform in the play.

The trip started out easily enough.  It was cold and overcast but the roads were dry and I made the journey in less than three hours.  My Dad was already in Springfield with my Grandma Poteet and I joined them at the funeral home.  My paternal grandparents were common folks.  This city boy had spent many a summer day visiting them on their farm.  They had a few cows and several chickens.  When I was very young I had learned you don’t pick up a chicken like a dog.  My grandparents were very loving and I found myself feeling very thankful for the love they had shared.

As I began the trip home snow had already been falling for an hour or so.  It was beautiful and driving was still no problem.  But as the heavy snowfall continued falling the roads became slippery and visibility was bad with the wind whipping back and forth.  I noticed there were no other cars on the highway.  I hadn’t gone 50 miles before I noticed my little Ford Pinto had a flat.  I pulled over to the side of the road and struggled in the cold and snow to change the tire. I was so thankful when a Missouri Highway Patrolman pulled up and together we managed to get another tire on my car.

I thought my one calamity had passed and surely I would have no other problems.  But the roads were getting so slick that before I had gone another 20 miles I slid right off the road.   No matter how hard I tried I could not maneuver my car back onto the highway.  I thought this hadn’t been such a good decision to leave with the storm bearing down.  Who was going to rescue me now?  It must have been 20 minutes when I spotted a faint light in the distance.  It was a tow truck.  He told me had already pulled six other cars out of the ditch.  I thanked this man several times and I was on my way again.

By the time I reached Oklahoma the snow had stopped and there was only freezing rain.  I drove 20 miles an hour the rest of the way home to avoid sliding off the highway again.  A two and a half hour trip had turned into a six hour nightmare.  But I was home and safe.  That Thanksgiving I was never so thankful not only for my wonderful grandparents but for the strangers, those good Samaritans, who had stopped for me.  This Thanksgiving, give thanks for your family and reach out and help a stranger. 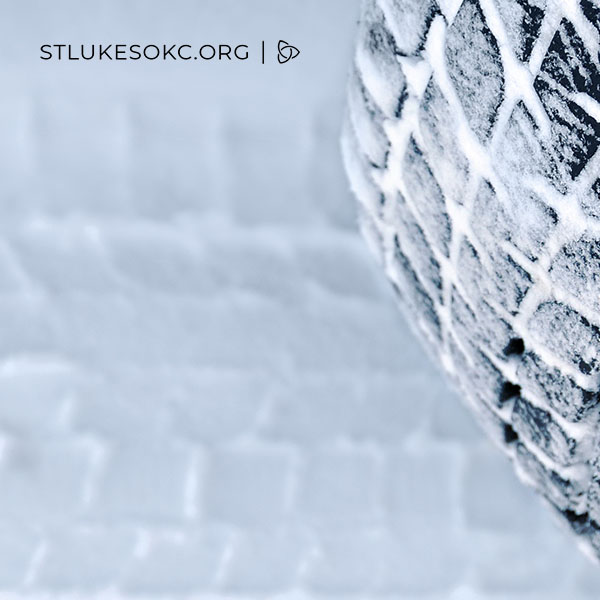