Lions On Our Side

The seed falling among the thorns refers to someone who hears the word, but the worries of this life and the deceitfulness of wealth choke the word, making it unfruitful. – Matthew 13:22

You hear the guttural growl.  You feel the icy stare.  The lion bares its sharp teeth just before the chilling roar.  There is no cage between you.  Other lions slowly enter the scene, locked on to your every move.  You don’t dare run.  One move could trigger the hunt.  But standing still seems foolish as they carefully move toward you.

Who could survive that impossible situation?  It sounds like the story from the book of Daniel.  God saved Daniel in the lions’ den by sending angels to close their mouths.  Daniel was rewarded for trusting in God.

But a similar miracle also happened to a 12-year-old girl in Ethiopia a few years ago.  She had been abducted and beaten by men trying to force her into a marriage.  After a week of being missing, her family and police found her on the outskirts of town.  She wasn’t alone.

She was surrounded by three black-maned lions.  How terrifying that must have been for her!  But police said those lions had apparently heard her cries, chased away her captors, and stayed with the girl.  It looked like they were guarding her as though she were their own.

“Then they just left her like a gift (for us) and went back into the forest,” an officer said.  “Everyone thinks this is some kind of miracle, because normally the lions would attack people.”

Imagine being in her shoes when those lions showed up.  Even though they chased away her captors, she may have thought her bad situation was about to get much worse.  But that fear never materialized.  Fear often has sharper teeth than real life.

In the above scripture from Matthew (The Parable of the Sower), Jesus compares worry to “thorns” in our spiritual garden.  We can read or hear God’s word to find comfort, hope, and strength…  but fear will choke those words, keeping them from growing in our soul.  Trusting in God, no matter the circumstances, will rip out those thorns and allow His word to flourish.

Letting go of fear is easier said than done.  It’s probably why the Bible mentions various versions of “do not be afraid” hundreds of times.  I need to hear it hundreds of times!  Remember that God created us to live in victory, not in fear.  The victory came through Christ’s resurrection.

We can live knowing the lions are on our side. 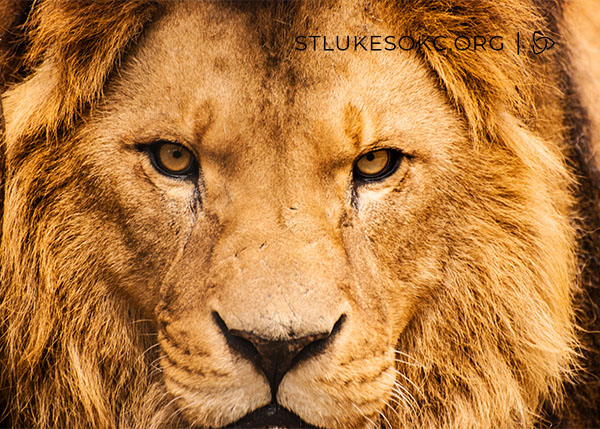