Trust in the Lord with all your heart, and do not rely on your own insight. In all your ways acknowledge him, and he will make straight your paths. – Proverbs 3:5-6

When I was a teenager, I worked on a farm.  It was twelve-hour workdays full of hay bales, cattle, and green tractor driving… lots and lots of green tractor driving.  This was the 90s when there was no smartphone, or even cell phones for that matter.  At least not the kind that a 13-year-old would have.  It was just me, the untilled ground in front of me, and all the country radio I could stand for hours at a time.  So needless to say, my mind started to wander quite often.

When plowing an empty field, I was told to follow the last line of dirt that the disc plow had made in the ground.  There was a clear distinction between the new turned fresh dirt and the old dry topsoil, so it was easy to see.  Being young and inexperienced, I followed that line as close as I could.  When my boss pulled up to check on me, he said, “Son, why does it look like there’s a giant snake in my field?” I looked up and realized that what were once straight lines up and down the field were now so off, it looked like I had fallen asleep at the wheel.

It became clear that every small imperfection in my driving I had made while following those lines had slowly compounded into very large wavy imperfections.  Embarrassed, I asked my boss how to fix it.  He said, “You don’t have to follow the path you have been on, just start a new straight one right down the middle of where you’ve been.” And just like that, I was back in that dusty green tractor and plowing straight again.  From that point on, anytime my lines started getting a little wavy, I just reset with a new line.

I think that’s what often happens to us as Christians.  We follow the same patterns and habits blindly, just because that’s what we know, and that’s what feels easy.  If we would simply take a step back and listen to some words of wisdom from one who knows better, we might find a path that is straight, one that is much easier to follow, and doesn’t have so many twists and turns.  More importantly, this is the path that God wants us to be on.  Lent is a perfect time to refocus ourselves.  It’s a time that we can listen to God and hear what He is telling us about the path we are on.  Do you have crooked paths in your life?  A path that once seemed small in the beginning, but now is out of control?  Maybe God is ready for you to start a new straight line in your field of life. 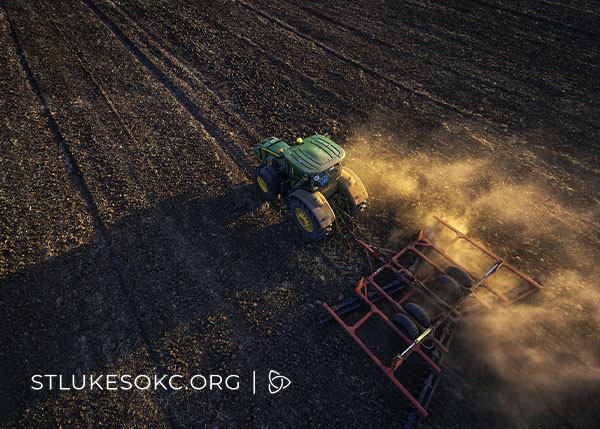