Camelot is based on the King Arthur legend as adapted from the T. H. White novel The Once and Future King. After the arranged marriage of Arthur and Guinevere, the king gathers the noble knights of the realm to his Round Table. The dashing and stalwart Lancelot joins, but soon finds himself enraptured by the lovely Guinevere. When Arthur’s illegitimate son, Mordred, reappears in the kingdom and outs the secret lovers, Arthur finds himself trapped by his own rules into taking action against his wife and closest friend.

Camelot is a musical by Alan Jay Lerner (book and lyrics) and Frederick Loewe (music). It is based on the King Arthur legend as adapted from the T. H. White novel The Once and Future King.

The original 1960 production, directed by Moss Hart and orchestrated by Robert Russell Bennett and Philip J. Lang, ran on Broadway for 873 performances, winning four Tony Awards and spawning several revivals, foreign productions, and the 1967 film Camelot. The original cast album was America’s top-selling LP for 60 weeks. The musical has become associated with the Kennedy Administration, which is sometimes called the “Camelot Era”. 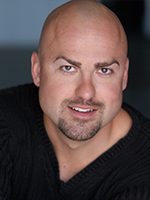 Tommy came to OKC in 2013 after an extensive career in TV, Film and Theatre in NYC. You may possibly have caught him on stage at the Civic Center in 2012 when he was performing in the Broadway National Tour of Andrew Lloyd Webber’s The Phantom of the Opera. While in OKC, he has performed with Lyric Theatre, City Rep, The OKC Theatre Company, Sooner Theatre and has been a guest artist with The OKC Philharmonic and you may catch him on your TV in a variety of different commercials. This Christmas, he is returning to Lyric Theatre to join the cast of A Christmas Carol. When Tommy is not performing, he works as a representative for Leica Biosystems. Most importantly, Tommy and his wife Jenna have two beautiful sons Bobby and Brody.

Julianne graduated from Oklahoma City University in 2015 with a Bachelor of Arts in Vocal Performance. During the day she is a software tester for MidFirst Bank. She is quite fond of the St. Luke’s choir and is grateful to sing with them every week. Depending on how this performance goes, she is debating changing her name to “Julianne Drews” in honor of Broadway’s original Guinevere.

Andra is a lyric soprano who was born and raised in Oklahoma City and received her Master of Music in Vocal Performance from the University of Oklahoma under the tutelage of Bradley Williams. She continues her study with world-renowned baritone and Met regular Kim Josephson. She has performed as a singing actress nationally and abroad. Her favorite musical theater roles include Marian in The Music Man and Maria in Sound of Music. Andra is a regular at Wichita Grand Opera and most recently performed the role of Frasquita in Carmen. Her favorite opera role is Mimì in La boheme. Andra currently attends Oklahoma City University College of Law along with her husband, Dustin. Andra is very happy to return home to Oklahoma City and rejoin the artistic community here.

Rob Glaubitz is on the faculty of the University of Central Oklahoma School of Music as a Professor of Voice and Opera.  In addition, he is Artistic Director for Painted Sky Opera which is entering its 4th season presenting professional opera in Oklahoma City.  He performs and directs regularly and will appear as Frollo in Kismet Arts’ production of “The Hunchback of Notre Dame” on August 1-4.

Video Clips - Movies and Shows
Characters in the Show
Arthur – An idealistic, compassionate and generous young King. He tends to be unsure of himself, but serves as a huge inspiration to others and strives to lead based on honor and chivalry.
Guenevere – A young, beautiful and spirited young woman and soon to be queen. She loves Arthur and his righteous ways, but is suddenly thrown with the arrival of Lancelot.
Lancelot – A self involved French Knight who is very used to excelling at everything.
Pellinore – An old and eccentric knight, devoted to Arthur.
Mordred – The illegitimate son of Arthur, bound to destroy his kingdom.
Tom of Warwick – A young stowaway whom Arthur knights, in hopes that he will spread the word of chivalry and Camelot.
Nimue – A mythical spirit who lures Merlyn away and steals his magical powers.
Merlyn – King Arthur’s long time mentor. A wizard who ages backwards.
Morgan Le Fey – Mordred’s magical Aunt who casts a spell on King Arthur.

Knights of the Round Table, Lords and Ladies of the court, townspeople.